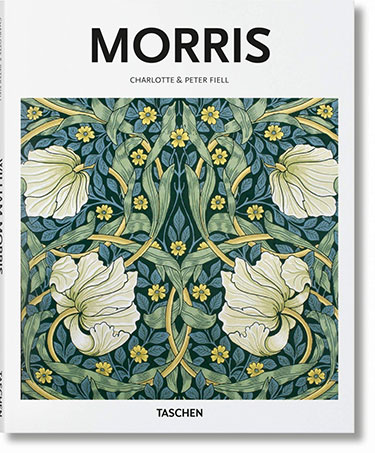 William Morris (1834–1896) was one of the greatest creative figures of the 19th century. As a visionary designer, as well as a manufacturer, writer, artist, and socialist activist, he pioneered the Arts and Crafts movement of the Victorian era, and left an extraordinary influence on architecture, textile, and interior design. This richly illustrated book offers a suitably beautiful introduction to Morris’s colorful life and all aspects of his design work, including interiors, tiles, embroidery, tapestries, carpets, and calligraphy. Though best known in his lifetime as a poet and author, it is these exquisite designs that secured Morris’s posthumous reputation. As page after page dazzles with their beautiful patterns and forms, we explore the pioneering craftsmanship and natural motifs that inspired them, as well as Morris’s remarkable cultural legacy, through British textiles, Bauhaus, and even modern environmentalism. The authors Charlotte & Peter Fiell have written numerous TASCHEN books, including 1000 Chairs, Design of the 20th Century, Industrial Design A–Z, Scandinavian Design, Designing the 21st Century, Graphic Design for the 21st Century, 1000 Lights, and Contemporary Graphic Design. They have also edited TASCHEN’s Decorative Art series and the 12-volume domus 1928–1999.