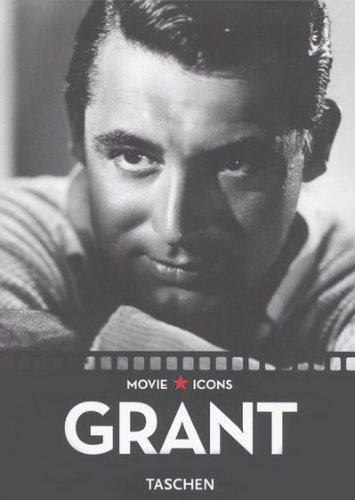 Mr. Charming“You say everybody wants to be Cary Grant? Even I want to be Cary Grant.” Cary GrantHe’s the most self-invented man in movies, this side of Charlie Chaplin. Like Chaplin, Cary Grant grew up poor, trained as an acrobat, and brims with confidence, romance, and a spirit of merry larceny—he just has a better tailor. His impeccable timing and light, cat burglar’s touch at stealing women’s hearts were perfect for the jaunty heroics and romantic farce of such classic films as An Affair to Remember, Notorious, His Girl Friday, North By Northwest, Bringing Up Baby, and To Catch a Thief. In the end, the role became the man—he had ceased to play “Cary Grant” and simply was Cary Grant. One could wish no man any greater happiness than that. The Movie Icon series: People talk about Hollywood glamour, about studios that had more stars than there are in heaven, about actors who weren’t actors but were icons. Other people talk about these things, TASCHEN shows you. Movie Icons is a series of photo books that feature the most famous personalities in the history of cinema. These 192-page books are visual biographies of the stars. For each title, series editor Paul Duncan has painstaking selected approximately 150 high quality enigmatic and sumptuous portraits, colorful posters and lobby cards, rare film stills, and previously unpublished candid photos showing the stars as they really are. These images are accompanied by concise introductory essays by leading film writers; each book also includes a chronology, a filmography, and a bibliography, and is peppered with apposite quotes from the movies and from life. All the icons in the first 20 books of the series were voted for by over 7500 TASCHEN readers in a special online poll! F. X. Feeney is a screenwriter and critic based in Los Angeles. His film credits include The Big Brass Ring, based on a story by Orson Welles, and Frankenstein Unbound, directed by Roger Corman, whilst his reviews have appeared in L.A. Weekly and other publications. F. X. has also written TASCHEN`s Michael Mann and Polanski.