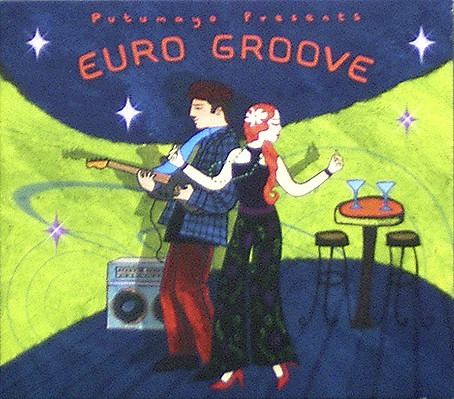 In Europe, electronica is every bit as diverse as it is in the United States. Plenty of harsh, abrasive, in-your-face techno recordings have come out of Germany, but on the other hand, European electronica also has its chillout/downtempo side — and that softer, more melodic side of European electronica is the focus of Putumayo’s Euro Groove compilation. You won’t find any dissonant, amelodic techno (that is, the rave equivalent of death metal or free jazz) on this 2008 release, but you will find sleek, accessible, and melody-minded club grooves (some of them with an alternative rap influence) that come from France (Martial’s “Cette Fille,” Mouss et Hakim’s “Mina”), Italy (Mystic Diversions’ “E Pa-Pa,” Fiamma Fumana’s “Check In”), and Spain (the Guateque All Stars’ “Superwhirly”) as well as Germany (2raumwohnung’s “Madchen mit Plan”). Euro Groove also contains Chumbawamba’s English-language track “Jacob’s Ladder,” but recordings that are in English are the exception rather than the rule on this 49-minute CD. For Americans who haven’t heard chillout and downtempo electronica performed in any language other than English, it might come as a surprise to hear vocals in French, Italian, Spanish, and German on Euro Groove. But in fact, all of those languages sound perfectly natural in a chillout/downtempo environment — especially if one has spent time in European countries where learning to speak three or four languages fluently is not uncommon. By being multilingual, Euro Groove paints a broad picture of Europe’s chillout/downtempo experience of the 2000s — and Putumayo, true to form, showed both good taste and a sense of adventure when assembling this enjoyable compilation. Allmusic