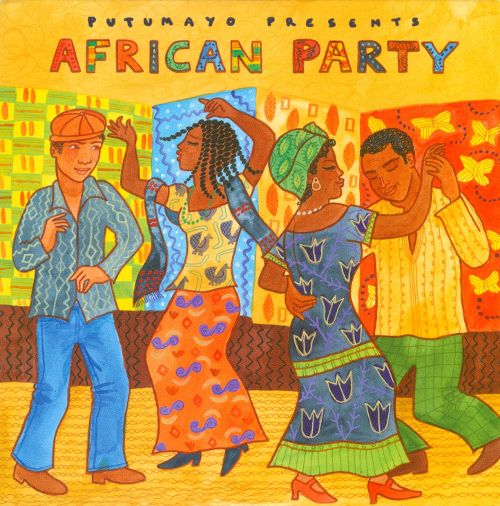 Released in part as an anniversary celebration for Putumayo, African Party brings the label back to its original sounds — simple African dance music. The styles are fairly wide-ranging here, roving from West Africa to South Africa and all points in between. Differently from many Putumayo releases, though, the singers here are primarily seasoned pros who have been performing for decades — very few are the young and fresh artists who make up a good portion of other Putumayo collections. The album starts out with a pair of Guinean artists: Sekouba Bambino, who comes from a griot lineage and the band Africando, and Macire Sylla, from a decidedly more urban setting and the band Fatala. BoPol Mansiamina, who’s played guitar for every soukous musician there’s been, provides a bit of rhumba, and Putumayo stalwart Oliver Mtukudzi adds in a sample of his highly fused “Tuku music” with aspects of chimurenga in the instruments and mbaqanga in the vocals, and a strong moral line woven into the lyrics. Les Go de Koteba mix traditionally strong Mandingo vocals with a relatively soft, almost soukous-like guitar line. Mapumba is clearly the youngest contributor, with a slickly produced fusion of South African aesthetics and Congolese guitar riffs. A special historical note comes with the highlife-heavy Kotoja — leader Ken Okulolo originally came to the U.S. with King Sunny Ade’s group, but after staying and forming Kotoja, he became the inspiration for Putumayo’s foundation (and one of the first to release an album on the label); they’ve kept the strong trap drum from Sunny Ade’s sound. Surrounded by thumb pianos, Zimbabwean singer Chiwoniso (daughter of the great Dumisani Maraire) has a modern sound that still incorporates some traditional aspects — Stella Chiweshe should be proud. Before the album ends, there’s a contribution from guitarist Louis Mhlanga who, like BoPol Mansiamina earlier, has played with half of the major stars of modern African music. The album ends on the Angolan semba of classic artist Bonga, here paired with a couple of Brazilian artists to take advantage of the Portuguese connections. The album is a little light in ways, averting itself from some of the edgier contemporary sounds that are now spilling out of Africa. However, it’s a dance album — this music is supposed to make the listener want to get up, and that’s where it succeeds. The performers are almost to a man veterans of their sound and masters of their form, and their form is dance. Allmusic