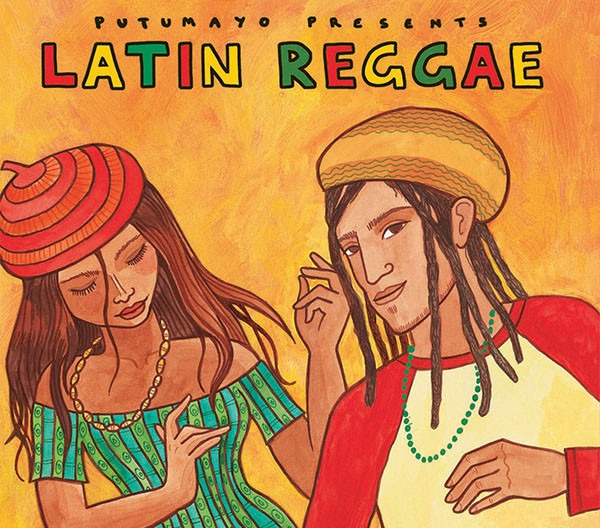 To some of the reggae fans who don’t speak Spanish, hearing reggae en español might seem un poco raro (a little strange). It’s a matter of conditioning; they associate reggae with the English language and Jamaican accents, and they have a hard time relating to reggae that isn’t performed in the language that Bob Marley, Peter Tosh, Desmond Dekker, and Dennis Brown grew up speaking. But in fact, Spanish-language reggae has a long history, going back to the wave of Panamanian reggae artists who emerged in the ’70s. And reggaetón (a mixture of dancehall and hip-hop that is usually performed in Spanish) has been phenomenally popular among Puerto Ricans, Dominicans, and Cubans since the ’90s. However, none of the Spanish-language reggae on Latin Reggae is reggaetón; the focus of this excellent compilation is reggae singing (as opposed to toasting or rapping), and Putumayo shows that reggae en español is every bit as natural as rock en español. Most of the artists on this 49-minute CD (which contains ’90s and 2000s recordings) are based in either Spain or Latin America; Amparanoia, Muchachito Bombo Infierno, Radio Malanga, Black Gandhi, and Macaco are all Spain-based, while los Cafres are from Argentina and Gondwana are from Chile. Many of the selections are traditional roots reggae that just happens to be in Spanish, including Radio Malanga’s “Charito Va” and Muchachito Bombo Infierno’s “Conversaciones Incompatibles.” But some of the other tracks fuse reggae with Latin rhythms. For example, “Reggae Rústico” by Puerto Rico’s Cultura Profética and Brooklyn resident Ticklah’s remake of Eddie Palmieri’s “Si Hecho Palante” offer a reggae/salsa blend, while Amparanoia’s “Ven” fuses reggae and flamenco. This nicely assembled CD does ignore an important area of Latin reggae: Portuguese-language reggae from Brazil, where artists have been fusing reggae and samba for many years. Regardless, Latin Reggae has no problem demonstrating that reggae doesn’t have to be en inglés to be excellent. Allmusic