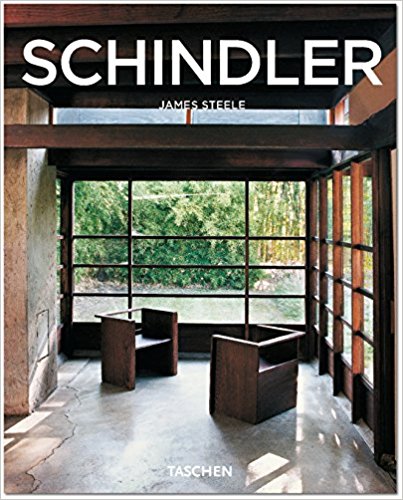 Rudolph Michael SchindlerEach of my buildings deal with a different architectural problem, the existence of which has been forgotten in this period of Rational Mechanization. The question of whether a house is really a house is more important to me, than the fact that it is made of steel, glass, putty or hot air. – R. M. SchindlerHailing from Vienna, Rudolph Michael Schindler (1887-1953), like his colleague Richard Neutra, emigrated to the US and applied his International Style techniques to the movement that would come to be known as California Modernism. Influenced by the work of Frank Lloyd Wright and taking cues from spatial notions found in cubism, he developed a singular style characterized by geometrical shapes, bold lines, and association of materials such as wood and concrete, as seen in his own Hollywood home (built in 1921-22) and the house he designed for P.M. Lovell in Newport Beach (1923-24). About the Series: Every book in TASCHEN’s Basic Architecture Series features:approximately 120 images, including photographs, sketches, drawings, and floor plans introductory essays exploring the architect’s life and work, touching on family and background as well as collaborations with other architects the most important works presented in chronological order, with descriptions of client and/or architect wishes as well as construction problems and resolutions an appendix including a list of complete or selected works, biography, bibliography and a map indicating the locations of the architect’s most famous buildingsAbout the author: James Steele practiced architecture in Philadelphia for a decade, taught at the King Faisal University in the Kingdom of Saudi Arabia from 1983-1989, and currently teaches at the University of Southern California. He has written several books on Los Angeles as well as various aspects of its architecture.