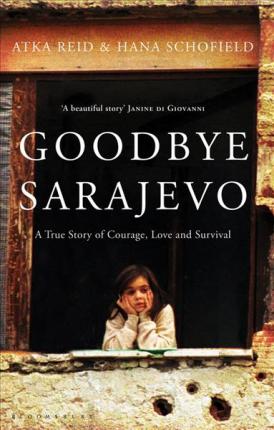 May, 1992. Hana is twelve years old when she is put on one of the last UN evacuation buses fleeing the besieged city of Sarajevo. Her twenty-one-year-old sister, Atka, staying behind to look after their five younger siblings, is there to say goodbye. Thinking that they will be apart for only a few weeks, they make a promise to each other to be brave. But as the Bosnian war escalates and months go by without contact, their promise to each other becomes deeply significant. Hana is forced to cope as a refugee in Croatia, far away from home and family, while Atka battles for survival in a city where snipers, mortar attacks and desperate food shortages are a part of everyday life. Their mother, working for a humanitarian aid organisation, is unable to reach them and their father retreats inside himself, shocked at what is happening to his city. In Sarajevo, death lurks in every corner and shakes the foundation of their existence. One day their beloved uncle is killed while queuing up for bread in the market square, in a massacre similar to the one three months earlier which prompted a cellist to make a lone musical protest in the deserted streets. But when Atka finds work as a translator in an old, smoky radio station, and then with a photojournalist from New Zealand, life takes an unexpected turn, and the remarkable events that follow change her life, and those of her family, forever. Set in the middle of the bloodiest European conflict since the Second World War, Goodbye Sarajevo is a moving and compelling true story of courage, hope and extraordinary human kindness.