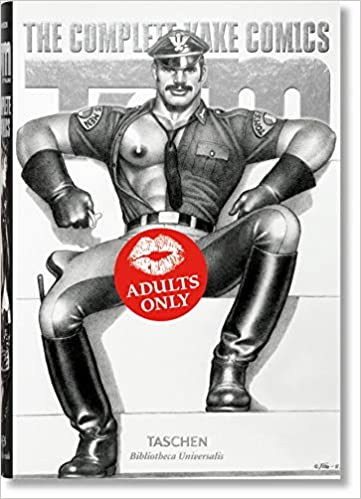 Bigger Is Better: The Ultimate Tom of Finland In 1998, TASCHEN introduced the world to the masterful art of Touko Laaksonen with The Art of Pleasure. Prior to that, Laaksonen, better known as Tom of Finland, enjoyed an intense cult following in the international gay community but was largely unknown to the broader audience. The Art of Pleasure gave Tom well-deserved recognition and increased his following exponentially; Tom of Finland XXL will fix him forever in the realm of fine art. At 29cm x 40.5cm and 666 pages, Tom of Finland XXL contains over 1,000 images, covering six decades of the artist’s career. The work was gathered from collections across the US and Europe with the help of the Tom of Finland Foundation, and features many drawings, paintings and sketches never previously reproduced. Other images have only been seen out of context and are presented here in the sequential order Tom intended for full artistic appreciation and erotic impact. This elegant oversized volume showcases the full range of Tom’s talent, from sensitive portraits to frank sexual pleasure to tender expressions of love and haunting tributes to young men struck down by AIDS. Completing this collector’s edition are eight specially commissioned essays on Tom’s social and personal impact by Camille Paglia, John Waters, Armistead Maupin, Todd Oldham, and others, plus a scholarly analysis of individual drawings by art historian Edward Lucie-Smith. For the man—or woman—who thinks bigger is better, Tom of Finland XXL is certain to satisfy. About the editor: Dian Hanson was born in Seattle in 1951. She has been TASCHEN’s sexy book editor since 2001. Prior to that she worked for 25 years producing various men’s magazines. Her many books for TASCHEN include The Complete Kake Comics, The Big Book of Breasts, and The Big Penis Book. She lives in Los Angeles. About the authors: Edward Lucie-Smith was born in 1933 in Kingston, Jamaica, and schooled at Oxford. He has published over 100 books, including Sexuality in Western Art and Latin American Art of the 20th Century. He lives in London and travels extensively. Armistead Maupin launched his fictive Tales of the City serial in the San Francisco Chronicle in 1976, later released as a six-volume series of novels, three of which were produced as miniseries for television. He lives in San Francisco. Todd Oldham’s studio is a multifaceted design studio for film, photography, furniture, interior décor, books, and even floral arrangements. He lives in New York City and in eastern Pennsylvania. Camille Anna Paglia is the author of five books, including Sexual Personae: Art and Decadence from Nefertiti to Emily Dickinson, her groundbreaking analysis of sexual ambiguity in art and literature. Paglia is University Professor of Humanities and Media Studies at University of the Arts, Philadelphia, PA, where she lives. John Waters was born in 1946 in Baltimore, Maryland, and briefly attended New York University. He made his first film, Hag in a Black Leather Jacket, in 1964, and has since directed 16 others, including Pink Flamingos, Polyester, Hairspray, and Pecker. He lives in Baltimore.