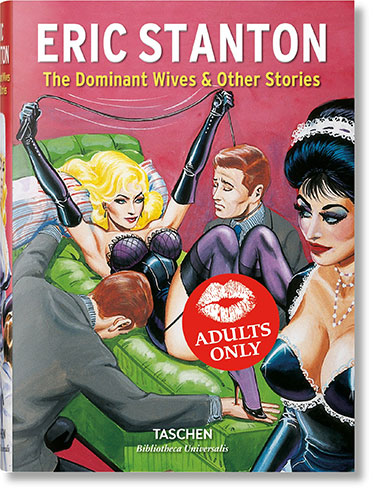 Eric Stanton (1926–1999) was America’s premier fetish artist, a man of very particular tastes, as all fetishists are. Most keep their work and sex preferences separate, but Stanton made his desires the center of his art, pouring his passions onto the page. These preferences included, in no particular order, female dominance, female fighting, mixed gender wrestling, and face sitting. Perhaps if the man born Ernest Stanzoni in New York City in 1926 had grown taller, all would have been different. As it happened, he topped out around 5’5” (165 cm), making him smaller and weaker than many women, and rather than bemoan this shortcoming, he chose to eroticize it. Then, like Robert Crumb and Tom of Finland to follow, he put his fantasies on paper. Stanton produced paperback book covers, magazine illustrations, comics and even wrestling and smother videos, but what he is best known for is his Stantoons: self-published 16- to 28-page booklets produced between 1982 and his death in 1999. These booklets best represent Stanton’s rich and complex fantasy life, as well as the lives of his fans, whose fantasies he also incorporated. This new edition of The Dominant Wives & Other Stories, brings together the finest of the Stantoons,along with Stanton’s most famous series for Irving Klaw: Bound in Leather, parts 1 and 2. Done in pencil, pen and ink, gouache and mixed media, these 20 stories represent the best of Stanton, who himself represents the best of fetish. The author Dian Hanson produced a variety of men’s magazines from 1976 to 2001, including Juggs, Outlaw Biker, and Leg Show, before becoming TASCHEN’s Sexy Book Editor. Her titles include the “body part” series, The Art of Pin-up, Psychedelic Sex, and Ren Hang.